My SS18 shenanigans started 24 hours after touching down from Ghana. Barely had time to chop my plantain chips with a glass of Alomo when I got around to the Andaz on Liverpool Street to see legendary Debbie Harry struttin’ for Vin and Omi #Dench

This year’s message was ‘Stop Fucking The Planet’. Eloquent!

The after party was next door at 1901. It was basically fashion peeps  people sippin’ champers so I got on with important business- uploading Insta stories…

When you’re at a perty that’s not a party…

On Friday (official first day) I kicked off with ‘queen of Fashion Scout’  Pam Hogg who was on the official BFC schedule ( ’bout bloody time!!!). I should’ve been gettin’ prepped for my girl Billie Jacobina but I’m a chancer innit? It paid off. Pam was early (15mins late) that’s a record breaker. Last season she was almost an hour late! #RockAndFuckinRoll

Got around for a quick catch-up with Jaime Winstone!

Once again she featured a diverse mix of model shapes and looks, whilst casting friends such as Alice Dellal and Ellie Winstone from previous.  There was reference to her signature style in various PVC cat/body suits as well as using soft bright colours of ruffled tulle to bring the spring/summer feeling.

It was great to be back again, sitting same place as last season on such a packed event. Pam closed with costume head pieces- leather masks in bright ruffles with models wearing matching catsuits… 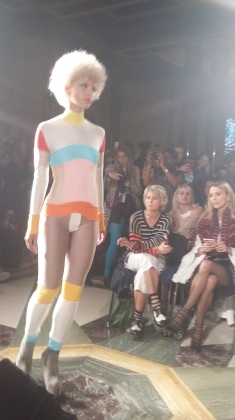 Pam Hogg on the encore

After that I sneaked off downstairs to get ready for the presentation event of the week. Billie’s Bakery. You know with Billie it’s always gonna be a sassy, funky and vibrant ting right?

Here’s the rest of your SS18 #SassSquad 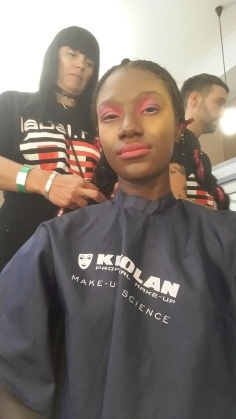 The Label M team getting playful with my braids…

Billie let her models eat cake! We had sexy cupcakes from @SugartitsLondon,  savage earings from @NoBasicBombshell and to top it off?? Shoes from @Irregularchoice #OMFG

Check out my #WhySoSerious backstage antics and follow me @MissBrownGotAround on Insta if you aint already…punk!

I got the abs out to rock a dope 2-piece look with orange and pink prints. Billie combined hand and digital prints with a sparkle of sequins on my trousers and in my hair.

And then it was showtime! Vogue gave me #Goals

It was a full on party. Cake, cocktails and sass alongside a live DJ set. What more could you want bruv?

As always Billie’s shows draw a huge crowd and Insta was flooded with feeds from her show for the rest of the week!

Next time will be even bigger so make sure to come down. It was great to see the rest of my original #SassSquad @elizabethwhibley and skater girl @Stefaninurdingxx again, Stef rocked her Hello Kitty board which also got us featured on their Insta! #Pow

Congrats to Billie for another shutdown ting!

It was an international affair with Neo Design, Ji Won Choi, Triinu Pungtis and Starsica showcasing another exciting show.

But first, here’s cool and her gang…

My fave was STARSICA- yes in CAPITALS. Apparently the name is derived from ‘star seeker’. The pieces were colourful yet also technically skillful. There were suitcases made from grass, models had cartoon eyes on their faces and the pieces were a nice balance of familiar but different.

After the show it was once again…a boomarang ting! #BoomerangQueen #YeahISaidIt

My day was topped off with Joshua Kane (he’s going to be sooo huge!!) at the London Palladium. Yasssss!!! Big thanks to @cashkattitude and the @JoshuaKaneBespoke team. I’ve been a JK fan for a couple of years and missed last year’s show so this was real #GOALS

The setting got me feelin’ pimp. But damn- that joint  and production was levels- there was even sword fighting. Man’s got some dough! Here’s a few of my fave 3-piece looks #JKFantasy

It was levels. The quality of the tailoring, the cuts and the fabrics. What stands out for me about @joshuakanebespoke is how he modernises old skool tailoring. JK represents the nu-classic #JustSaying

Check out the rest here: https://joshuakanestore.com/

I chatted with former Olympian and friend of JK, Victoria Pendleton (in full JK 3-Piece!!!) afterwards before the afterparty. She’s really into her tailoring and even studdied with Paul Smith #FunFact 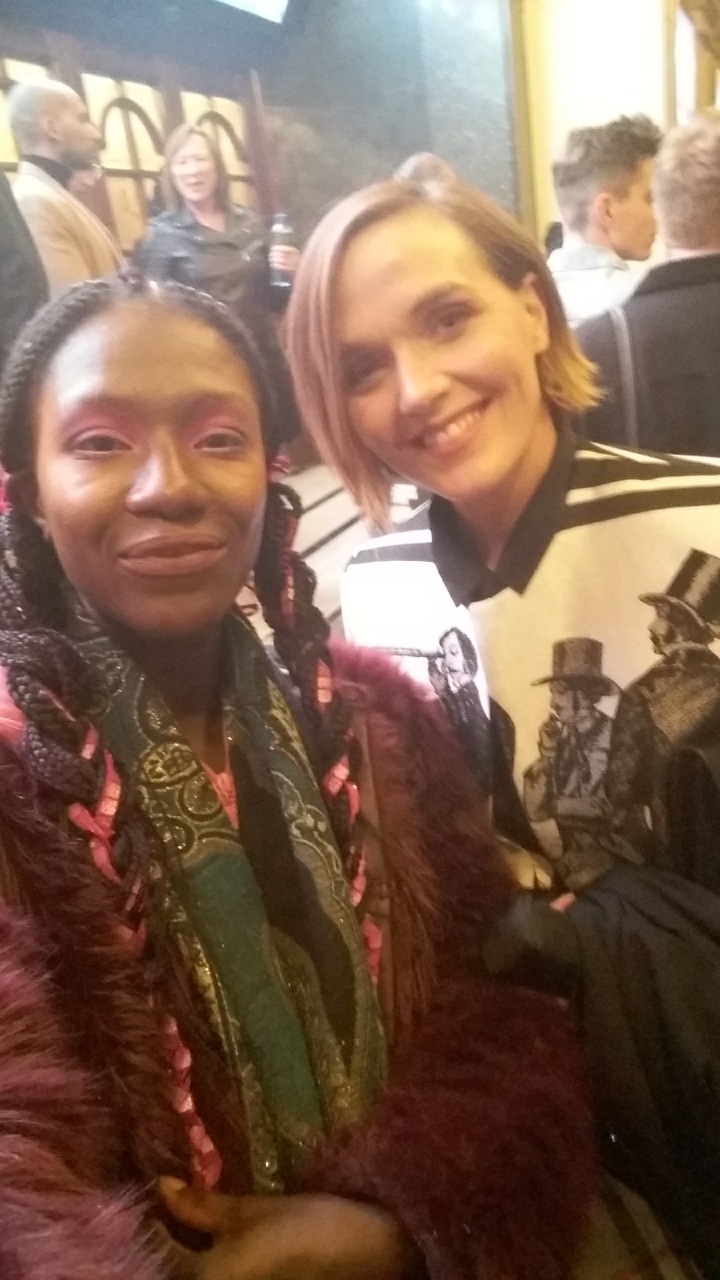 You know your sh!t’s poppin when you got Mrs and @Mrfashionscout on da boomerang flex #FashionScoutHeroes

Highlights from Day 2 included Han Wen and John Herrera, the latter presented 30 RTW couture pieces (inspired by Diogo Ribiero’s 15th century map) to the catwalk. Each featured digital printing and there was a medieval theme with models in  beautiful ‘halloween-like’ makeup… 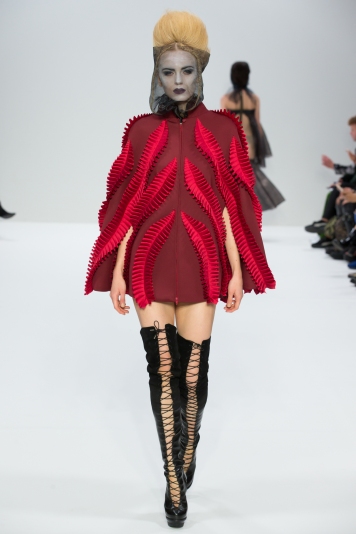 Overall, #OOTD went to EDDA. It’s been a year since the designer showcased at Fashion Scout and once again- she came to slay. This was my favourite look…

EDDA’s presentation had a Brazilian ‘bassa nova’ feel from it’s playlist which was perfect for setting and the glamorous, shimmying models. It help to transport us far away as we took in her wicked collection with her signature artwork and outlines ‘drawn’ on. The thigh boots killed it and the explosion of soft mustard colours against pinks and blues really made it pop. What also made it pop was the diverse #MelaninPoppin models on show, it aint even a thing but…issa ting! #Sauce

Can’t forget the ‘ Ranjeen riot’ by INIFD-LST. Really liked that Fashion Scout are introducing global talent and influences, let’s get more of African talent through the doors too!

Day three it was time for me to ‘tun-up’ and strut for amazing couture and RTW designer, Jasper Garvida. He showcased his ‘Gravitas’, a selection of his iconic pieces from previous seasons with guests including Lady Victoria Hervey.

But first, there were #ThighGameStrong shenanigans with my Fashion Godmother…

I was glad to be rocking my #BraidsGang look again. The lovely team at AOFMakeup got my #Facebeat- it was all in the eyes… 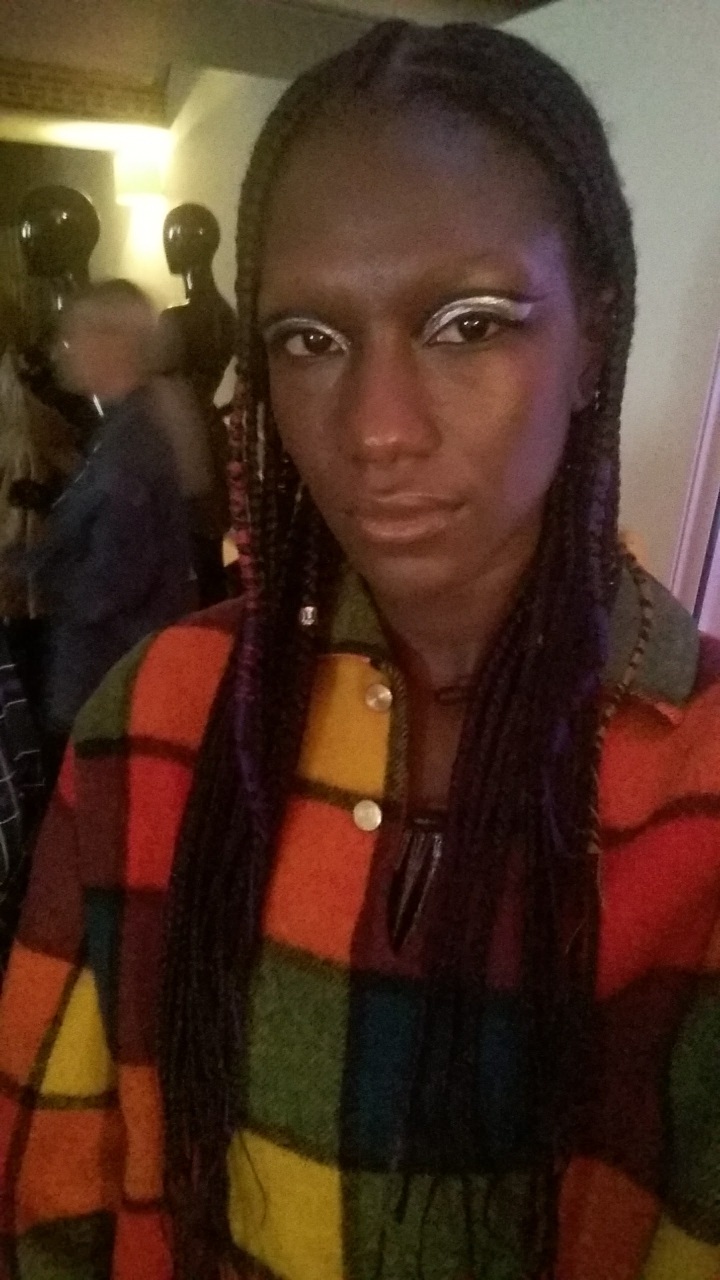 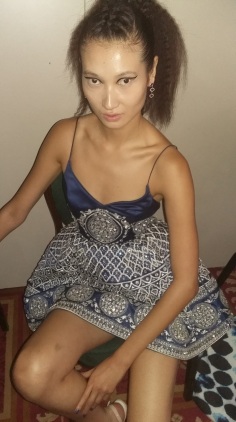 After show vibes was nuts… funkin’ proud of Jasper! #Yasss

This also happened to be his last show for the forseeable future. More on that later- we had to raise a toast in celebration #EndOfAnEra

I transformed back to the ‘fro and groovy vibes to Fashion Scout for what was a hellava theatrical night of #HumanMeatFreaks from @Hellavagirl which ended in a parry!!

This one was giving me liiiife… #CominThruLike

I FROWd wid the party crew including maverick model @patcordier dancing in our seats and cheering like it was a concert. That’s how mood it was.  When the finale came out…we got wylin’ out. It was lit. A dench finish to the day. #WhySoSerious

Hellavagirl shut. It. Down. Hard!

On day  4 I got my pants on and came through with my wicked @_sassyfreak headpiece. 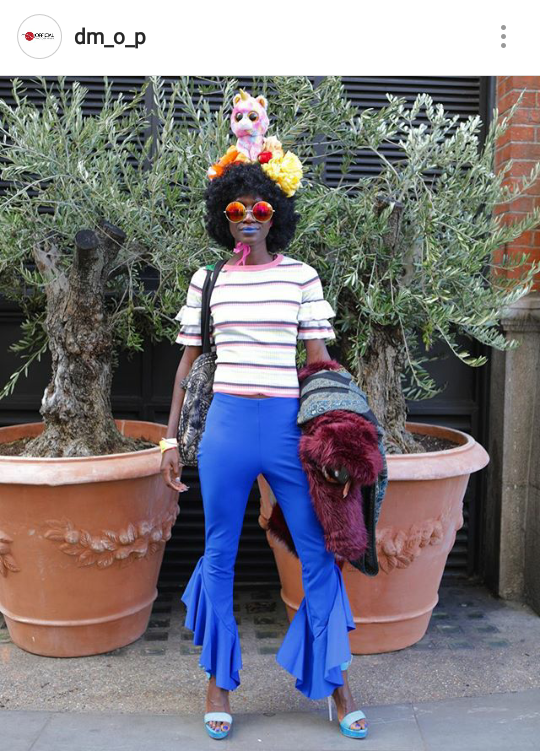 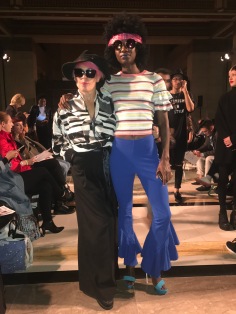 As you know I’m a big supporter of emerging talent and I have a good eye- sass levels. So not only did I rock @_sassyfreak garms (follow her), I also invited the new graduate to get around with me for the day.  Like Billie Jacobina, I spotted (Katie) @_sassyfreak earlier this summer during Graduate Fashion Week. Watch this space…

Next stop, BFC  to cause a scene innit?? #AllEyesOnMe 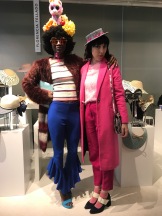 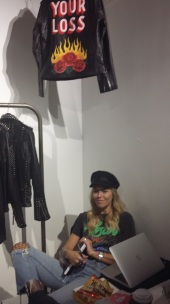 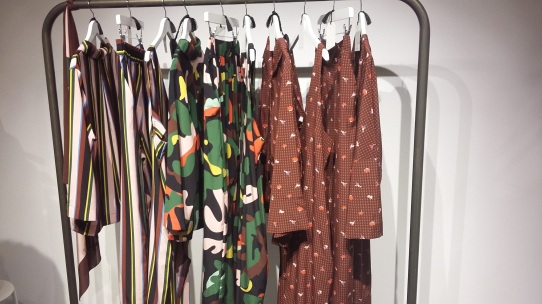 And I think somebody put something in my Evian…

I also watched the FAD Fashion Futures show which showcased designs from teenage finalists, hosted by model and presenter Annalaise.  There were tears of pride from the finalists and guests I really saw the difference FAD meant to the designers. #FashionPioneers

The programme was supported and judged by brands such as Asos, and the  playlist had nice tunes including Afrobeats. 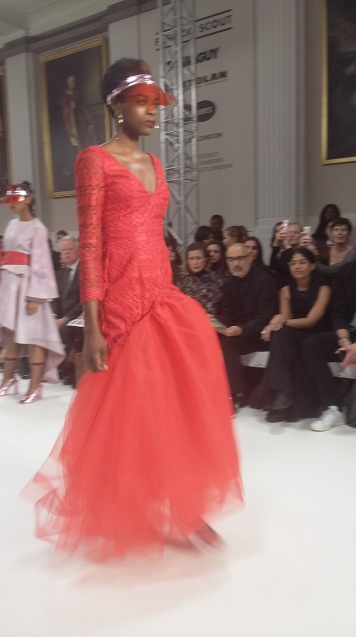 Amongst the winners was 19 year old Tyana Hemmings who won the Textiles category.

On the final day it was a shut down ting. I was the sassiest, cuddliest freak around. #JustSaying

But the show of the day was CSM graduate Jack Irving’s spectacular multidimensional pieces. This season he totally went harder and bigger (literally) at the BFC for another amazing ON:OFF Presents. I’m not even going to explain- watch this #NextLevelShit

Ya get me? I caught up with Jack and his #TeamLongLegs at the after party…

Last but not least, I ended my SS18 shenanigans partying with Rihanna.  Yes. The artist formally known as @BadGirlRiRi. I got round to her VVIP (Edward Enninful was there!!) Fenty Beauty launch party, but that’s another story you’ll have to tune in for… #Casual

Make sure you’re following me on Insta @missbrowngotaround

…she just cute tho 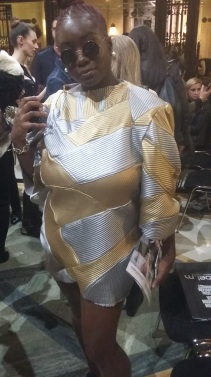